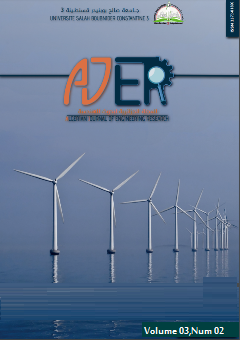 The first paper concerned the optimization of the production of a home made yogurt by an enrichment with phenolic compounds of the carob pulp (Ceratonia siliqua L.) as well as following key parameters like the pH and the viscosity (Benchikh et al).

The second paper dealt with an environmental analysis within a company producing and marketing household electrical appliances (air conditioners, washing machines, televisions, cookers), in order to establish the list of the environmental aspects and to identify those considered as significant and also to implement an Environmental Management System (Adjiri and Harrag).

The third paper reported a study concerning the control of the pollution parameters of the Seybouse basin basing on data collected during the period from 2003 to 2014, by identifying the characteristics of the surface waters of these rivers and by determining their qualities. The approach was based on chemical analyses of the water to identify the nature and levels of pollutants (Rabah and Bouchelkia).

The next paper dealt with the modeling and optimization of the degradation of Orange acid 10 by Fenton process, with the objective to use a minimum of experiments by applying a modeling design of the Box-Behnken type. The effects of the different parameters and their interactions on the response were investigated (Djeghader et al)

The next paper concerned the design of a control strategy for voltage and for reactive power flows passing through the road lines networks, using a static synchronous compensator (STATCOM) device that is parallel type compensator based on the absence of parallel voltage source converters (VSC), as well as the development of a control strategy of reactive power and voltage on a transmission system under the Matlab environment (Gasmi).

The next paper dealt with a numerical study on natural convection in a square cavity heated from the base wall while the upper wall was adiabatic and the vertical walls were maintained at a constant cold temperature, in order to examine the fluid behaviour inside the square cavity (Zermane te al).

The last paper was concerned with the study of clay type material like Bentonite collected from Maghnia (Algeria), modified by oxides and impregnation by a metal of transition and tested as a catalyst for oxidation reactions (Boudjema and Choukchou-Braham)

The Chief Editor and his staff would like to thank Professor Bouras Ahmed, the head of Salah Boubnider University, Constantine 3 and Professor Benmohamed Karima, the vice-rector in charge of post graduation and research for their permanent encouragements towards the development of this journal. 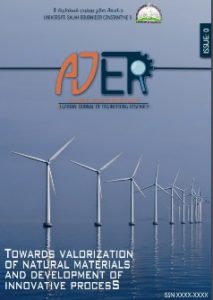 Please submit your paper to: